Duplexes are known for having a mix of qualities of both an apartment and a house. They are like apartments because they usually aren’t a standalone unit.

On the other hand, their house-like qualities are that they offer more privacy and space.

It is this option of the best of two worlds that makes duplexes the favorite choice for many families.

How many bedrooms are there in a Duplex?

By design and size, duplexes all vary and come in different forms. The same is the case with the number of rooms and bedrooms.

On average, duplexes have 2-4 bedrooms while the total number of rooms ranges between 7 and 14.

The number of bedrooms is usually what determines the amount of rent you’ll have to pay. Each duplex unit usually consists of two floors.

On each floor, there is at least one bedroom. The common rooms like the living room and kitchen are usually built on the lower floor of the duplex.

When the total number of rooms is counted in a duplex, the spaces that are taken into account include bedrooms, living room, kitchen, dining room, office rooms, and family rooms.

So, if a duplex unit has four bedrooms, one kitchen, and one living room, then the unit is said to have six rooms.

Other spaces, such as laundry rooms, bathrooms, storage rooms, hallways, mudrooms, etc., are not counted in the number of rooms offered by a duplex unit.

Now let’s take a look at the variation of the number of rooms and bedrooms offered by different duplex units in the paragraphs below!

A duplex unit with a single bedroom is usually accompanied by a kitchen, a living room, and a dining room. This makes the total count of rooms 8 (with 4 rooms on each floor).

Some duplexes come with two bedrooms, one kitchen, a living room, and a dining room in each unit.

This makes the total count of rooms be 10. Sometimes these units also have an additional smaller bedroom called the maid’s room.

Another category of duplexes comes with three bedrooms, a living room, a kitchen, and a dining room on each unit.

In total, these duplexes have 12 rooms. In some cases, the two bedrooms are accompanied by an additional small room, the maid’s room.

What are the factors that affect the total number of rooms in a duplex?

There are a number of factors that determine how many rooms a duplex will have, especially because no two duplexes are the same.

Take a look at the factors that have the most impact on the number of rooms a duplex contains:

Size of the duplex

The biggest factor that determines the number of rooms in each unit of a duplex is its size. Therefore, the bigger a duplex, the more rooms it will have.

In most cases, the bigger size of the duplex means that it will also have more bedrooms than a smaller unit, along with separate spaces for a living room, dining room, kitchen, office, etc.

Therefore, if a duplex unit has three bedrooms, a living room, dining area, kitchen, and home office, then it is considered a big duplex with a total of 14 rooms.

This number excludes the space for bathrooms, hallways, and other spaces that aren’t considered as rooms.

On the other hand, a smaller duplex that has three bedrooms, a kitchen, a living room, and a dining area, i.e., 5½ rooms per unit., the total number of rooms in the duplex is 11.

The layout of the duplex units

Another factor that affects the number of rooms in a duplex is the layout and interior design of each of its units.

For instance, in some cases, the mezzanine level at the upper level of a smaller duplex only has a sleeping loft instead of a proper floor.

In order to make this kind of unit seem more spacious, the ground floor’s design could be open plan.

This type of layout could mean that one shared space may open into another, i.e., the living room opening into the dining area and sometimes into the kitchen as well.

As a result, this unit will only technically have three rooms, and the duplex will have six rooms in total.

The location of duplex

This factor often gets overlooked, but the location of a duplex has a huge impact on the number of rooms it will have.

For instance, the duplexes located in big city centers will be much smaller in size than the ones located in suburban areas.

The reason for smaller sizes of city duplexes is that city centers are crowded and mostly offer one-bedroom units and studio apartments, so more people are accommodated.

Duplexes in the outskirts and suburbs of big cities often cover more square feet and offer more space. Due to this difference, the duplexes in urban areas typically have more rooms than their counterparts in suburban areas.

Cost of the duplex

This is a fairly obvious one. The cost of the duplex also reflects the number of rooms it will have.

The number of bedrooms in a duplex determines the total number of rooms.

It can often be confusing to differentiate between the bedrooms and other spaces because some people may use the shared spaces as sleeping areas as well.

However, not all rooms can be categorized as bedrooms just because they are used for sleeping purposes. In order for a room to be legally recognized as a bedroom, it must follow the following requirements:

Area: For a room to be recognized as a bedroom in a duplex, it must at least cover an area of 70 to square feet.

Means of exit: For a room to be counted as a bedroom, it must have at least two means of exit. So, in addition to a door, a window in the room will count as the second means of exit in cases of emergency. In some cases, the skylight can also qualify as a means of exit, but that is very rare.

So, if a room has a door and window, which is big enough for a person to climb through, i.e., with the size of the opening being 5.7 square feet and a height of at least 24 inches.

Height of the ceiling: For a room to be categorized as a bedroom, its ceiling should also meet certain requirements of the height, so tight spaces such as basements and attics are ruled out. The ceiling of a bedroom must be at least 7 feet tall.

Horizontal area: A bedroom must at least be spread out 7 feet in a horizontal direction.

Private and easy access: Some states have a regulation for bedrooms of duplexes that they should be accessible easily and privately, without having to go through another bedroom. Moreover, each bedroom should also have direct access to a bathroom, as well.

No two duplexes are the same. They come in various sizes and layouts, which means the number of bedrooms also differs from a unit to the other.

Other factors, like the location and cost of the duplex, also have a significant impact on the number of rooms a duplex will have.

If you’re looking for a duplex, make sure you consider the number of occupants you intend to have to decide how many bedrooms you’ll need.

You must also do extensive research and compare multiple options before deciding on one. Keep the location, cost, and size of the duplex into consideration while making your decision. 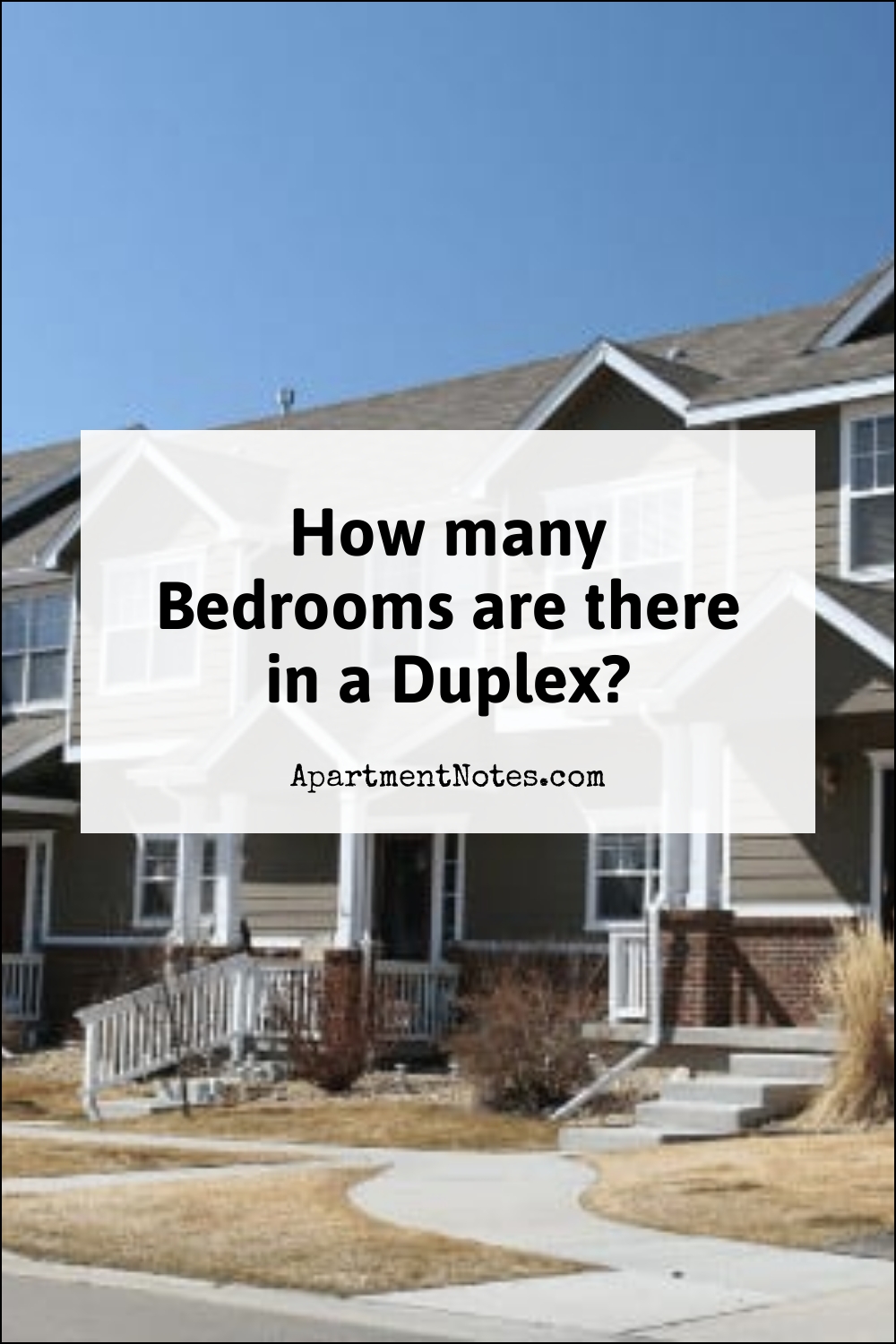