A negative air pressure means that the pressure of air inside is less than the pressure outside, which causes the air to infiltrate the building.

What are the steps to create the right air pressure inside the house? You will know the answer in this article.

Positive or Negative Air Pressure: Which is Better?

In the case of negative air pressure, contaminants such as smoke and other particulates will build-up, which will degrade the air quality inside the house. The building will draw in cold air from the outside through openings and cracks.

In other words, the difference between the air exhausted and supplied inside the house should be enough to maintain positive air pressure.

But the positive pressure differential should not be large. This is important; otherwise, it can damage the structure of the house.

Signs of a Negative Air Pressure

The results of negative pressure inside the house include health issues, high energy costs, and uncomfortable conditions at the workplace.

Positive or negative air pressure occurs due to the imbalance between the air entering the room, and the air that is exhausted.

Positive air pressure forces air out of the building through cracks in the windows and doors. It also results in the air escaping outside when someone opens the doors.

Here are some of the factors that result in positive or negative air pressures.

Some of the factors can be controlled while others are due to natural forces such as high wind pressure.

Wind pressure can facilitate either positive or negative air pressure on one side of the house. It will force air to enter from one side and exit from another.

You cannot control the wind pressure, but you can block it, such as by planting trees or creating a wall.

Sealing the house can also reduce air pressure. You can use a leak detector to find out and plug the seals.

Air pressure can also be due to a chimney or stack effect. The rise of warm air results in increased pressures on the upper parts of the house.

Due to the laws of physics, the air will be drawn in on the lower portions of the house.

You cannot do anything about the chimney effect. But understanding the effect is important so you know how to create a positive air effect by focusing on other factors.

Any appliances that use gas, such as stoves and fireplaces, drive out air outside the house.

Unless they are vented from the outside, gas appliances will force inside air outside the house.

Negative air pressure will cause flue gasses to backdraft inside the houses. This is a serious concern that can have a negative impact on health.

Ducts should be well sealed.

You need to get them tested at least once a year. A professional technician will use pressure tests to identify the leaks.

Oven hoods can also create negative or positive air pressure. You need to run them at a low speed where they can remove the smoke.

Also, it is advisable that you put lids on pots. The water will emit less smoke and boil faster. As a result, you won’t have to run the hood at a high speed.

Some people connect the exhaust fan to a light switch, which can be ineffective.

It’s better to run the fans through a timer or a humidistat that activates based on the humidity level inside.

It will ensure that the fans are not running unnecessarily, which can result in excessive positive air pressure.

Centralized vacuums with HEPA filters are convenient as they don’t eject airborne particles. However, they also create depressurization, which disturbs the air pressure inside the house.

Using a traditional vacuum is recommended to avoid an imbalance in the air pressure. Most modern vacuum cleaners come with high-quality filters.

It is better to buy a traditional vacuum cleaner than a centralized cleaner.

Just make sure that the MERV (Maximum Energy Efficiency Reporting Volume) rating is above 13 so that it properly cleans the room.

Traditional air vents don’t bring back the air inside the house.

The front door inside a house does not open as often as the front door of a store. So, the above are the most common sources of air getting inside and outside the house.

This results in the outside air getting pulled inside from the attic, crawlspace, and cracks around the doors, windows, and electrical outlets.

It brings outside humidity, heat, and pollutants inside the house. The result is reduced indoor air quality.

Moreover, it makes it harder for the heating and cooling system to maintain the desired room temperature.

How to Create a Positive Air Pressure?

HRVs have two ventilation ducts with a heat exchanger at the center. The ducts run between each other and pass between the house interior and exterior.

One duct carries cool fresh air inside the room, while the other carries the stale air outside.

The heat exchanger placed in the middle of the ducts allows the outgoing air to pass the most heat to the incoming air without actually mixing the airstreams.

There is generally a fan or a blower on each side of the duct that accelerates the process of exchange of inside and outside air.

ERV is the alternative to an HRV that works in a slightly different manner to maintain proper air pressure inside the house.

The device transfers the moisture from the outgoing air to the incoming air that helps maintain the humidity levels inside the house.

ERV device is recommended if you live in a hot and humid climate. The device will maintain the proper humidity levels and reduce the load on the air conditioner.

In contrast, HRV is better if you live in a cold and less humid climate.

Using HRVs and ERVs will help keep the room well ventilated. Installing the device may involve a lot of costs.

But the investment is worth it as it will result in a healthy environment inside the house.

Final Remarks about Positive Air Pressure in an Apartment

Maintaining positive air pressure can improve the quality of air inside the house.

It will also result in energy savings as the HVAC device will work efficiently in keeping the rooms at a comfortable temperature.

Keeping positive air pressure is not that challenging as it may seem.

The tips mentioned in this blog post will ensure that the air pressure inside the house is slightly positive resulting in greatly improved indoor air quality. 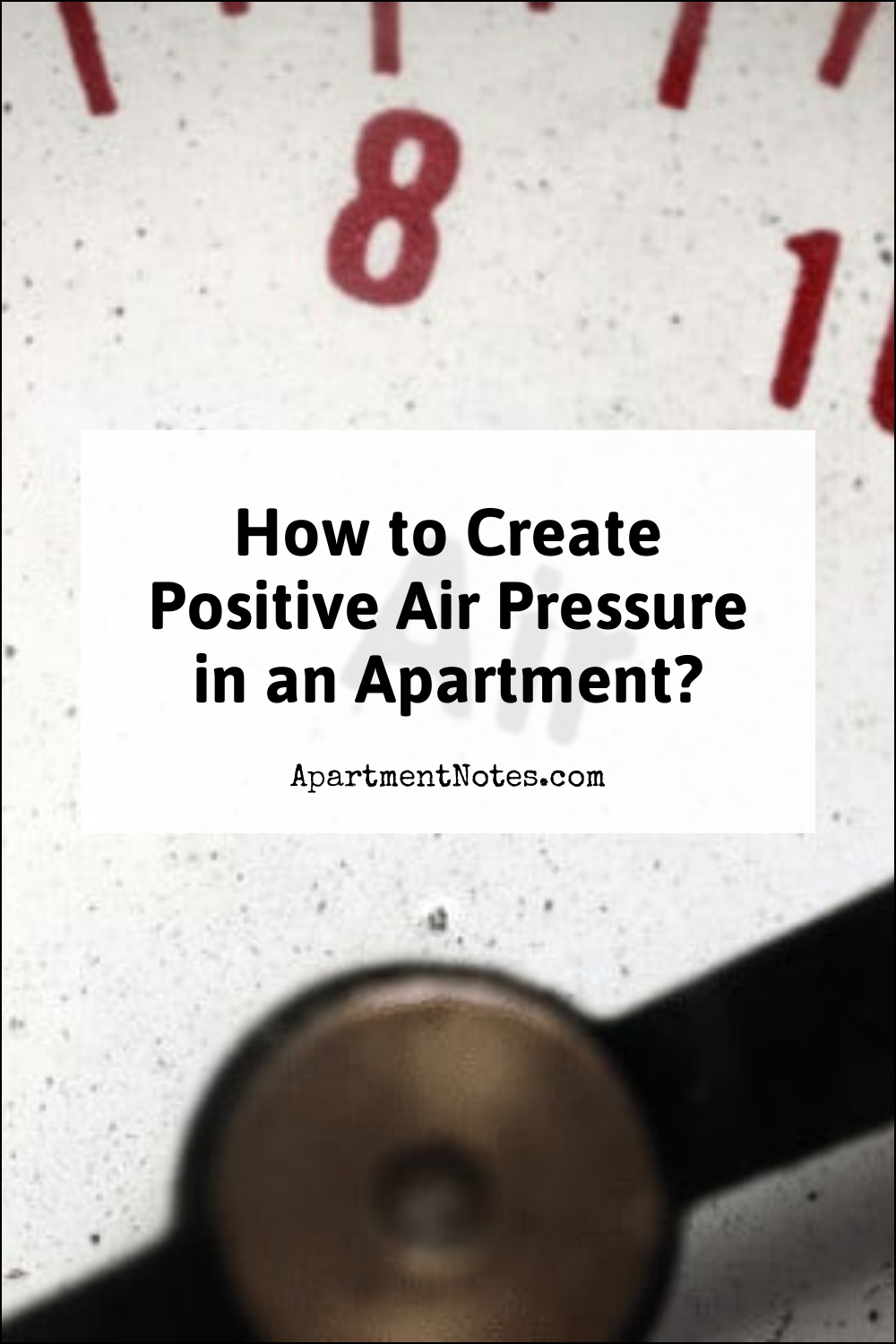