How many people can live in a 2-bedroom apartment?

That is a question that goes through the minds of those that are looking for affordable housing.

Just like any rental property, the rules and regulations regarding the occupancy limits of a 2-bedroom apartment also depend on the landlord’s policy. So, the limits vary from property to property.

If a landlord is strict and particular about occupancy, then you may be limited by the occupancy restrictions.

If the landlord is flexible about the arrangement, then they may leave it to you to decide how many people you want to live within your rented apartment.

However, keep in mind that no landlord will tolerate a number that damages their property or disrupts the overall living environment of the apartment building.

What are the Standards Set by the Federal Government?

Now, you may be wondering whether there are any standards set by the federal government with regards to occupancy limits.

The Federal Department of Housing and Urban Development has a Fair Housing Act that recommends a maximum of 2 people per bedroom in a rented unit.

So, according to federal recommendations, only four people should occupy a 2-bedroom apartment.

The recommendations set by the federal government are based on the safety of both the occupants and the rented property.

The occupancy limit ensures that the tenants live safely in the unit and also that the apartment doesn’t sustain any physical damages.

If the apartment is overcrowded with occupants, then there is a higher risk of accidents and fire hazards. It will also make it difficult for all occupants to get out safely in times of emergencies.

When there are more people, there is more stuff and belongings. It also means that more water and energy will be consumed.

Therefore, if the rent includes utilities and it has been calculated with a certain number of occupants in mind, then the increased number of people can become a cause of trouble with your landlord.

Moreover, it will also cause wear and tear to the apartment that it may not be strong enough to sustain.

Therefore, you should keep the number of people in mind while selecting an apartment. Ideally, a 2-bedroom apartment should not be occupied by more than four people.

Why do Occupancy Limits Vary?

There are several factors that determine the limit of the number of people that can live in a 2-bedroom apartment.

For instance, there is an age requirement for residency in senior living communities.

A person is often required to be at least 55 years old to qualify for residency in such a community, so their occupancy limits are usually lower, as they aren’t required to allow children to live.

In some cities and local areas, there may be specific rules of occupancy limits. For example, a landlord can have a “two plus one” policy, which only allows one extra person per bedroom in the apartment. This plus one leniency is usually allowed because the tenants maybe a family.

The Fair Housing Act considers familial status as a protected class for housing, so the landlords can’t refuse families with children as tenants.

As per the act, landlords are required to let families live together whenever and as much as possible. This flexibility is required to be offered even in apartments with strict policies.

With so many different regulations and rules, it’s important to check with your potential landlord and apartment building management for the maximum number of occupants allowed in an apartment unit.

How is a Guest Differentiated from an Occupant?

If a person is staying in your apartment but isn’t on the lease, then there will be limits to how long they can stay with you. If you don’t mention a long-term co-resident in your lease, that will be considered a violation of the lease.

It is alright to have people over for a night or two and once in a while, but if someone stays for a prolonged period, then they will be considered a tenant.

In most cases, they will start counting towards the occupancy limit after they have crossed the one-week residency period.

So, if you plan on having someone stay with you for the long-run, it’s important that you let your landlord know. Make sure you read your lease properly and understand the regulations about new tenants and guests.

It’s better to be aware of the rules beforehand so you don’t get in trouble with your landlord or get a complaint filed against you.

How do the Occupancy Limitations Implement in Practice?

The implementation of capacity limitation can become challenging during the screening process of tenants. Some landlords may discriminate “softly” in the lease when the number of household members comes under discussion.

The signing of the lease is the time when it is established how many occupants will be allowed in the rented property.

For example, the lease may only allow the occupants that are mentioned on the lease to stay with you for prolonged periods.

After that, it is up to the landlord’s discretion to add or not add an additional tenant to the lease. However, this doesn’t necessarily apply to children. Due to the fair housing act, landlords are required to offer flexibility to families.

The maximum occupancy problem arises when you have an additional roommate or an extended house guest.

In some cases, landlords try to take advantage of this situation and allow the maximum number of occupants on the lease so they can get maximum rent.

For example, by putting three roommates in one bedroom, they get more rent than leasing the room to a single occupant.

For good quality of living, a 2-bedroom apartment should not have more than four occupants.

Make sure you comply with your lease, local regulations, and federal recommendations when leasing a 2-bedroom apartment. 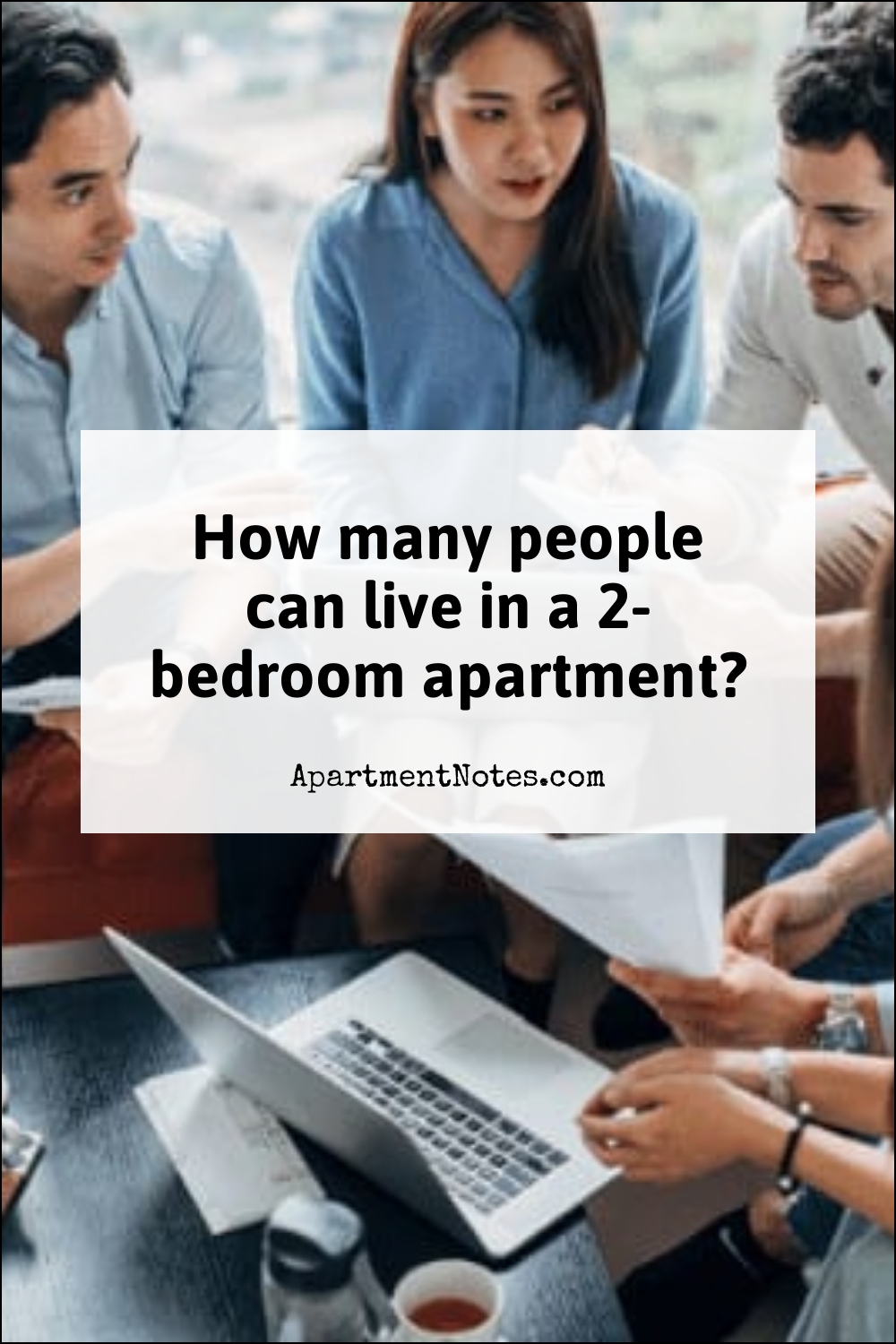