Not every apartment has access to reliable power sources in the case of an emergency, such as a storm or a blackout.

So, since most apartments don’t have backup generators on-site, you’ll have to wait for the power to come back on if it goes out.

That said, gas-powered generators are the first thing that comes to mind in this situation. But they aren’t always the best option. You can only use them outside due to their noisiness and gas consumption.

So, with that in mind, here’s everything you need to know about using a generator in an apartment and whether you’re allowed to use one.

Are Generators Allowed in an Apartment?

Yes, generators are allowed in an apartment. However, you must follow a few safety precautions while operating a generator in a small living space.

Before utilizing a generator, you should always speak with your building management or landlord. Always verify first, because some buildings have strict rules against utilizing generators.

If given the go-ahead, some common safety recommendations should be kept in mind. First off, a generator should never be used inside.

The generator’s carbon monoxide emissions can quickly accumulate and result in major health issues or even death.

So, if you absolutely need one, ensure that you set it up outdoors, far from any windows or doors. However, just to be cautious, you should install a carbon monoxide detector in your apartment.

What Generator Size Should You Get?

A tiny generator with at least 1,000 watts of power can run a refrigerator and some lights for three to five hours.

You can select one with a little less capacity if you have power outages that last less than two hours; this should be plenty to power up most small gadgets.

You can use the online power calculator, select the appliances you need to power, and determine the capacity of the generator you’ll need.

Here are a few different types of generators you can look into to power your apartment:

The view of generators as noisy, obtrusive electrical devices has significantly changed since the development of inverter generators.

These generators produce alternating current (AC) electricity thanks to an engine coupled with an alternator. They then use a rectifier to change this AC power into direct current (DC) electricity.

Inverter generators provide several benefits over traditional generators for their consumers. Firstly, they rarely make any noise during operation.

Additionally, they consume 20 percent less gasoline and provide safe power to use with delicate electrical devices like laptops and cell phones.

The first target market for inverter generators was outdoor enthusiasts like campers, hunters, and anglers who wanted to bring a little bit of home with them.

However, these days, apartment owners can also utilize these generators to get them through power outages without causing noise disturbance for their neighbors.

These generators are fascinating because they harness the sun’s radiation for electricity. Unquestionably one of the most basic sources of energy surrounding us is solar electricity.

Solar panels are the primary way solar generators obtain energy from the sun. The generator’s battery is then charged using this energy.

This battery’s charge is then used to generate power.

The inverter in the solar generator then converts the power into alternating current because most appliances today use AC.

This is another type of generator you can use in your apartment without causing too much noise.

These are great for generating temporary electrical power and are often fueled by gas or diesel.

These generators utilize a combustion engine to create and conduct electricity, which is one of their main properties.

In fact, they have enough power to operate televisions, freezers, and refrigerators and can also be placed anywhere.

These generators feature a sizable external tank that keeps them going for at least 48 hours before they need to be refueled. They can operate on either diesel or gas.

These generators are commonly used to power an entire apartment complex rather than a single unit. Plus, they are large and typically cost thousands of dollars for a basic unit.

These generators, often known as gas generators, are arguably the most popular ones today. Their widespread use and popularity are mostly because of their ability to run on gasoline.

These generators are at the lower end of the pricing range.

They are typically available in compact sizes, which greatly increases their portability. After all, their key benefit over other generator types is their ability to be placed anywhere you like.

A gasoline generator is the best option for home usage, especially if you don’t have high power requirements.

However, they cannot be kept indoors in an apartment because they provide toxic exhaust fumes, mainly carbon monoxide.

So, if you want to purchase one for your apartment, ensure that you place it on your balcony. This will prevent harmful exhaust fumes from accumulating inside your unit.

This is among the most popular and effective ways to produce power and energy. Natural gas generators operate quite similarly to other kinds of generators.

To generate energy, they either use propane or liquefied petroleum gas.

Natural gas is the best fuel source since it can be conveniently stored in above or below-ground tanks, which gives these generators a very long lifespan.

Natural gas generators greatly lower expenses when used as power sources in homes, and are affordable and environmentally friendly.

This is mostly because power from a primary utility source doesn’t burn a hole in your wallet, compared to putting gasoline inside a gasoline-powered generator.

However, if you’re looking to get one for your apartment, ensure that your unit has access to a natural gas line, especially on your balcony.

Like gasoline generators, natural gas generators also produce harmful exhaust fumes. So, keeping them in an open area with good ventilation is best.

Furthermore, if you want to keep a standalone propane tank with your natural gas powered-generator, ensure you exercise caution. These tanks can catch fire and explode if kept close to a heat source.

Which Generator Should You Use in Your Apartment?

While living in an apartment, purchasing a compact generator is probably wise. Furthermore, it would be best to avoid diesel and gasoline-powered generators no matter what.

The most secure generator choice for an apartment is one that uses batteries. This particular generator doesn’t make a lot of noise and doesn’t release any harmful gases.

Because it often has various charging methods, including AC charging and solar charging, a solar or battery-powered generator is your best bet.

These generators typically resemble a television or microwave. But they can power most household appliances for a few hours.

Where Should You Keep Your Generator?

Your generator should be kept in a dry location with the cords securely fastened to prevent accidents. When not in use, keep your generator in a dry, dark location away from any direct sunlight.

Since you need to keep your generator close to the appliances that you need to run when the power goes out, you may not always be able to control its permanent location.

But if you can, try to keep it somewhere cool and dry. To prevent people from tripping over cables, keep the cords out of any locations with high foot traffic.

Can You Keep a Generator on Your Apartment Balcony?

Most landlords won’t allow you to place a generator on your balcony, especially generators that produce harmful exhaust.

After all, these fumes can travel through the windows and lead to carbon monoxide poisoning.

However, if your balcony faces an open area, they might. So, to avoid conflict with your landlord, it would be wise to get a solar generator instead.

In fact, you can leave your solar generator on your balcony as long as it’s not raining or snowing.

Battery-operated generators may be used inside flats without problems, but you should always use them responsibly.

In light of this, here are a few battery-powered generator safety tips you need to consider:

Long periods of inactivity might shorten the generator’s battery life

In an emergency, generators can be a terrific way to keep the electricity going in your apartment. However, it’s crucial to utilize them carefully.

One wrong step can lead to disaster and cause bodily harm, especially in a small living space like an apartment.

Ultimately, do your due diligence and research your options before splurging the cash on a brand-new generator.

Furthermore, don’t forget to ask your landlord if generators are allowed inside apartment units. 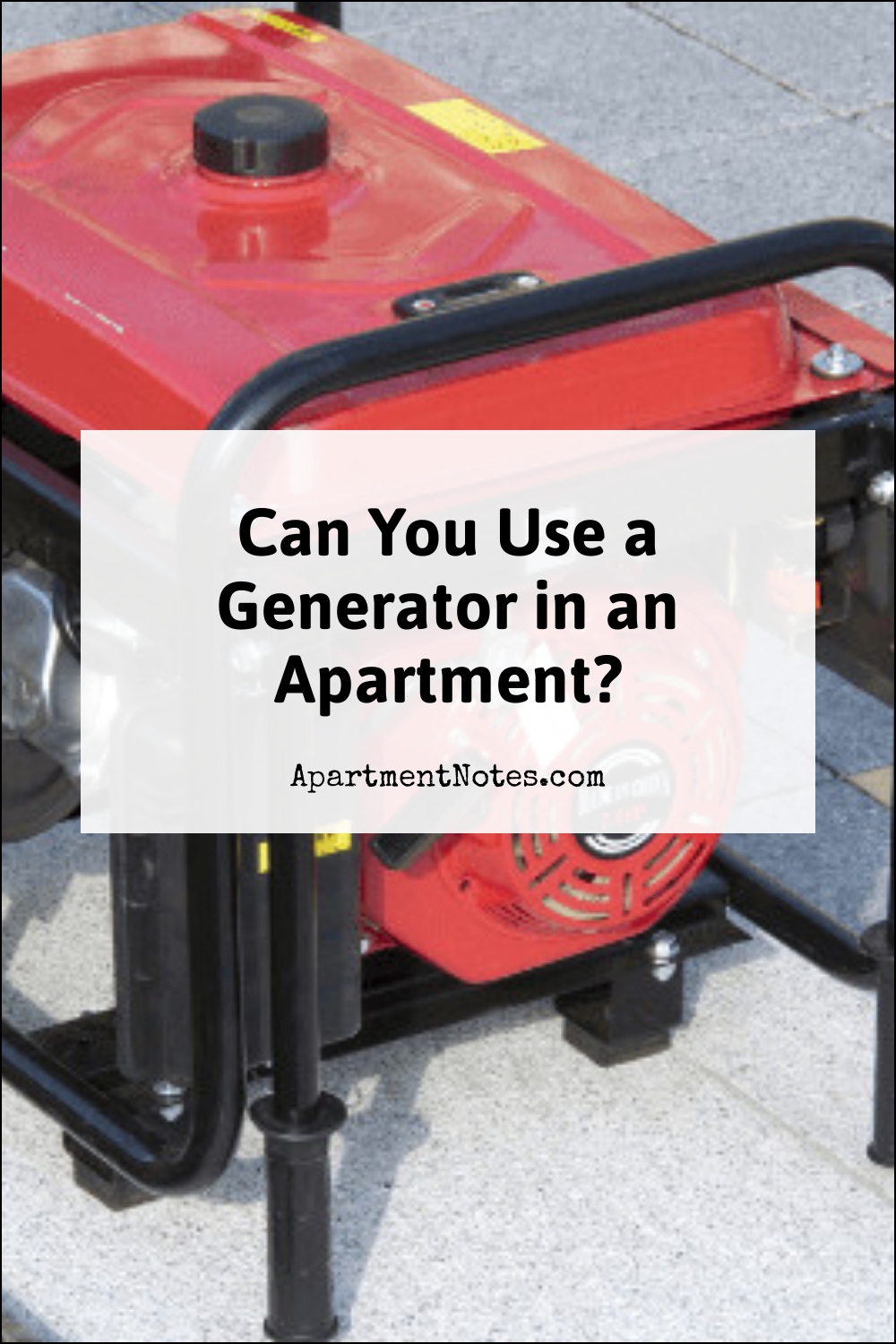