With more and more landlords restricting smoking in apartments, it can be difficult for a smoker to enjoy a cigarette in the comfort of their home.

Obviously, life would be easier if you can find an apartment without smoking restrictions.

But if there are none available that fit your needs, take time to carefully read the lease to determine what and where you can and cannot smoke.

Does the no-smoking clause refer only to cigarettes, or can you smoke a pipe or a cigar?

And how about marijuana smoking?

If, as it probably will, the lease or rental agreement forbids smoking anything, take heart and remember where there’s a will, there’s usually a way.

Don’t Be Afraid to Ask

In some cases, landlords use what is referred to as a boilerplate lease.

That is, rather than compose their own rental agreement, they rely on one-size-fits-all documents available to landlords.

Your landlord may be amenable to discrete smoking. And rather than reveal that you’re the smoker in question, couch the inquiry in terms of entertaining smoking guests.

And if he/she allows discrete smoking, be sure you get it in writing.

What Will Happen if You Smoke?

A rental agreement is a legal document. It states tenant rights as well as those of a landlord. It is intended to avoid future problems down the road.

So, find out what will happen if you smoke.

Will you get a written reprimand, or will you be evicted? And if you are forced to move, will any security deposit you were required to make be returned to you?

According to Nolo, an online provider of free consumer-oriented legal information, if you sign a lease or rental agreement that has a no-smoking clause incorporated into it, your landlord may be able to terminate your tenancy (evict you).

However, if it’s not incorporated into the document, he may only be able to evict you if you are repeatedly caught smoking.

If you decide to smoke, don’t do so near your apartment’s smoke detector.

Setting off a fire alarm is a sure way to get caught smoking since the landlord or custodian who comes to investigate will instantly detect the tattletale smoke.

And although you may be tempted never disable the smoke detector.

Yes, it’s a dead giveaway when it comes to sneaking a clandestine smoke.

But should your apartment suffer a fire, disabling it would prove to be truly deadly.

If you only smoke now and then during the day, you might want to take a break and walk to the edge of the property or driveway.

In a highrise or multi-story building, there’s always the sidewalk outside the entrance.

But beware, some cities mandate a non-smoking perimeter around the door.

Talk to Your Immediate Neighbors

Speak to your next-door neighbors.

Find out how sensitive they may be to the faint odor of smoke seeping through common walls of rooms like the kitchen or bathroom.

Will they mind if you smoke on the balcony as long as they are not out on theirs?

It pays to be friendly, talk to all your neighbors.

You may learn you’re not the only smoker in the building. Find out where they smoke.

They may be able to give you some tips.

While no one is asking you to stop smoking, instead of lighting up, consider vaping or e-cigarettes.

Either of these alternatives will permit you to satisfy your smoking habit without producing the intrusive smoke or stale odor that will alert your landlord or cause neighbors to complain.

And don’t overlook the air vents.

Smoke that gets drawn into these can travel through the apartments in line with yours — both above and below.

And if your building has an HVAC system, the odor can be distributed throughout the entire building.

Closing air vents is as easy as sliding a side lever. But if by any chance they have become rusted in the open position, covering the vent with a plastic bag will do the trick.

Harken Back to High School Smoking

Remember the old song, “Smoking in the Boys’ Room”?

If you’re like many smokers, you began in high school with perhaps a clandestine smoke in the boy’s room, the girls’ room if you’re female.

Well, if you got away with it then, you can do it now, and for several reasons.

First of all, tile floors don’t soak up smoke like the carpeted ones in the rest of your apartment does.

Then there’s the bathroom exhaust fan. It not only removes the usual bathroom smells from the room but sucks up smoke.

And for extra measure, you can turn on the bathroom shower since hot steam can absorb the smoke and reduce its odor.

Ozone to the Rescue

You might want to invest in an ozone air purifier.

Ozone is a gas created by ultraviolet radiation in the upper atmosphere. It is also generated when an electrical charge passes through oxygen.

If you have ever noticed how fresh the air smells after a thunderstorm, it’s because lightning has charged the oxygen and added an extra atom to its normal two-atom configuration.

This is why the chemical symbol for oxygen is 02 while 03 symbolizes ozone.

Ozone is considered an unstable gas since it wants to shed that extra atom and return to being oxygen.

But this is an advantage when it comes to taking the odor of tobacco out of the air.

As ozone floats in the air if it encounters a contaminant like smoke particles, the third atom will break away and attach itself to the smoke.

This creates a microscopic explosion that destroys both the extra atom and the smoke.

Gambling casinos where smoking is allowed are often equipped with large ozone generating machines to purify the air.

But you can find smaller ones on the market which will achieve the same effect in your apartment.

These are a bit pricey, running anywhere from $200 to $600. But they’re cheaper than looking for a new apartment if you get evicted for smoking.

If you don’t want to spend the money on these rather expensive oxygen generators, you can buy ozone sprays.

This instantly destroys the smoke particles creating a smoky smell and replaces it with the more pleasing scent of fresh rain.

And if you use an electrical fan, the odor will dissipate even quicker.

You might also look into other types of air purifiers that are more budget-friendly than oxygen generators.

Allergy sufferers swear by them since they clean the air of allergens like pet dander, dust, and pollen.

But they also work well when it comes to smoke particles.

Much like a vacuum cleaner, an air purifier sucks the smoky air into it.

There it goes through several filters that trap odors and toxic air particles, including smoke particles before returning fresher air into your apartment.

Air purifiers that use carbon filters or activated charcoal have been found to be most effective.

For a really affordable solution and a handy one too, look for a personal air filter.

Compact and convenient, this device allows you to smoke as you normally do.

The only difference is that rather than exhale into the air you exhale into the neck of the plant-based cylinder housing the personal air filter, vastly reducing the amount of secondhand smoke and odor that would normally occur.

Although not as effective as ozone sprays, you can use trendy articles like essential oil diffusers and scented candles to mask the smell of cigarette smoke.

If you have these going all the time, whether you’re smoking or not they can become the signature scent of your apartment, minimizing the tattle tale smoky odor.

And don’t forget the old standbys that smokers have been using for years.

Although they do not work as well, nor in most cases smell as good, you can stock up on plug-in air fresheners and spray can air deodorizers.

Taking long luxurious smokes may relax you and take away your tension.

And they may be great with a drink or to cap a great meal. But the longer they last, the more smoke you release into the air.

Save such indulgences for outdoors or your car.

Limiting yourself to short sneaky smokes while in your apartment reduces your chances of smoke being detected outside your door or window.

Look to Yourself, Smoker

Did you ever stop to think that you may be a lasting advertisement that you’re smoking in your apartment?

Smokers tend to be immune to the smell of smoke clinging to their clothes and hair.

But if you constantly wreak of smoke each time you run into your neighbors, or worse yet your landlord, they will begin to wonder.

There are steps you can take to minimize the amount of smoke that clings to your person.

Opt for smoking outfits of tank tops rather than sweatshirts or sweaters, and don snug-fitting shorts or yoga pants rather than flowing garments like skirts or long pants.

And speaking of long flowing things, if you have long hair, drawing it up into a bun or ponytail helps as well.

And when it’s time to leave your apartment, make sure you exchange your smoky clothes for those you keep in smoke-tight places like closets or dresser drawers.

Shampoo your hair every day. And of course, don’t forget to brush your teeth like a maniac!

Contrary to what many smokers think, constantly chewing gum is a dead giveaway.

And There You Have It

If you have no choice but to live in a non-smoking apartment, this compilation of tips may make it easier to enjoy a smoke without constantly listening for footsteps outside your door. 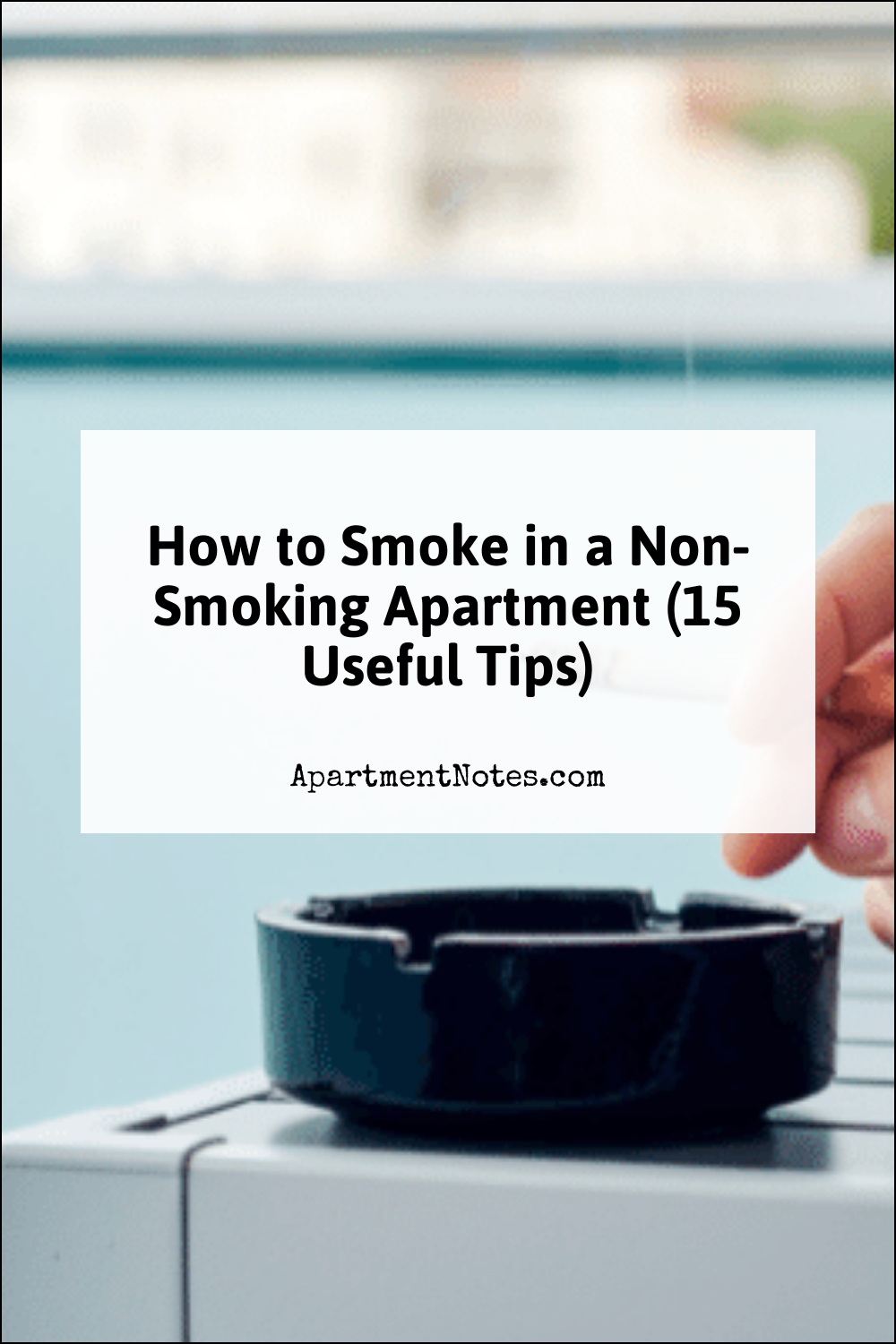