Your apartment could be shaking for any number of reasons. This includes neighbor activity, trains or traffic passing by, nearby construction work, or even the building’s plumbing.

In this guide, we will go over all the possible reasons why your apartment is shaking.

Is It Normal For Apartments to Shake?

Shaking events aren’t common in most apartments. However, they aren’t completely unheard of either.

Some highrise apartments shake on windy days because the wind’s force causes the building to sway slightly. This swaying motion puts stress on the building’s construction materials.

This stress in-turn manifests as vibrations that can be felt inside the building. Such shaking events could be considered normal and aren’t likely to put you in any danger.

You might have dealt with noisy neighbors in the past. But have you ever dealt with neighbors shaking your apartment? Believe it or not, this can happen.

Some apartment buildings with thin walls and floors can transfer vibrations from one unit to the next. This means you might be able to feel vibrations from your neighbor’s activities.

These could be vibrations from a subwoofer your neighbor cranks up while blasting music during social events. It may also be from the vibrations of people in the apartment jumping.

Such shaking is temporary and doesn’t pose any threat to you or your apartment. However, it can certainly be annoying.

If you live in a major city with an extensive subway station, there’s a good chance that subway activity is causing your apartment to shake.

Subway trains are long and heavy. The forces they exert on their tracks are massive. For this reason, it’s not uncommon for them to shake structures around subway stations.

Many apartment buildings with basements are located very close to subway lines. In fact, some apartments have exits that open next to subway station entrances.

Subway activity is nothing to be alarmed about. It might cause your apartment to shake slightly during the day time. However, most subway lines don’t run late at night.

For this reason, you won’t have to worry about this shaking disturbing you when you are sleeping.

Traffic can also cause your apartment to shake. However, such occurrences are rare and are usually limited to special situations when traffic is heavy.

Your apartment may also shake when large or heavy trucks are passing by. This could be a frequent occurrence if you live next to a major highway.

As with subway activity, this is nothing to be alarmed about. Such vibrations are relatively minor and shouldn’t impact your building’s structural integrity in any way.

If you live near the ground floor or your building’s basement, your apartment could be shaking due to mechanical systems.

Many apartment buildings have mechanical systems such as water pumps and furnaces located in their basement section.

Such construction includes many activities that could cause your apartment to shake. For example, the movement of heavy trucks transporting building material.

Jackhammers and drills are also notorious for causing vibrations that end up impacting surrounding floors and buildings.

These vibrations travel through the ground at high speed and shake an apartment building’s very foundations. You might even feel your top floor apartment shake in some cases.

Your apartment may also start shaking if its structure has been compromised. This is a serious issue that should be addressed as quickly as possible.

So what does a “compromised structure” refer to? This is when your building’s foundations are no longer suitable to support the structure above them.

Similarly, the building structure could become compromised after an earthquake. This usually happens if the earthquake has separated the foundation from the ground.

If your building’s structure has been compromised, the shaking will get progressively worse over time. In extreme cases, the building could be at risk of collapsing.

For this reason, you should alert your apartment building’s manager immediately if you notice the shaking getting worse over time.

Problems That a Shaky Apartment Can Cause

A shaky apartment might not cause serious issues in most cases. However, it can be an annoyance. Here are some of the problems of living in a shaky apartment.

Vibrations in Different Parts of Your Unit

Your apartment’s shaking behavior can lead to vibrations that are felt inside your unit. These vibrations probably aren’t strong enough to move your couch. But they can be annoying.

You might feel these vibrations most strongly when you are sitting on the ground, such as while meditating or practicing yoga.

Similarly, you might feel a tingle beneath your feet when you are sitting on a chair or on the couch.

Noise is the biggest issue associated with shaky apartments. The vibrations from such shaking are often too light to feel. However, the noise it produces can be prominent.

Such noise can bother you while you are trying to sleep at night. It is possible to get used to this noise, but it can still be distracting if the humming is intermittent or uneven.

Some people may also be embarrassed by the noise from their apartment shaking. This may cause them to avoid calling guests over or hosting events.

You might start experiencing nausea if the shaking is too great. This isn’t completely unheard of.

Many studies have found examples of skyscrapers shaking to the extent where residents start feeling ill. Such shaking is typically triggered by high winds causing the building to sway.

Again, such issues are relatively rare. The Burj Khalifa, which is the tallest building in the world, sways by up to 2 meters in high winds.

By contrast, the Willing Tower which has 110 floors sways by only a few inches.

Is It Dangerous If Your Apartment is Shaking?

As mentioned above, it isn’t uncommon for apartments to shake for different reasons. Most of these reasons are nothing to be concerned about.

This shaking isn’t likely to cause your belongings to topple over or your shelves to collapse. Any major shaking that does this would probably be classified as an earthquake.

If you are ever caught in an earthquake, you should immediately drop under a heavy furniture item such as a desk or bed. This will prevent falling debris from landing on you.

How to Deal With Your Apartment Shaking?

Many of the factors that cause your apartment to shake tend to be temporary. So you can expect things like construction activities or renovations to eventually end.

In such scenarios, you simply have to wait it out and your apartment will eventually be free of these “shaking” events. In other cases, you might need to take action.

For example, your apartment might be shaking because your neighbor is using a subwoofer during a party. In this case, you can politely ask them to turn it down.

If your apartment is shaking from continuous or regular activities, you might need to take other measures. This includes:

Getting Your Floors Dampened

External vibrations that cause your apartment to shake can be reduced by getting your floors dampened. Many professional companies offer such floor dampening services.

This process involves removing your floor boards and placing a flexible material that can absorb vibrations underneath.

Such material can completely absorb or reduce the intensity of the shaking. When installed correctly, this floor dampening may even prevent your walls from shaking.

This is because your walls are likely shaking due to vibrations being channeled upward from the floor.

Getting your floor dampened should also help reduce some of the humming noise you might hear from your apartment shaking.

If this noise is still bothering you at night, you can invest in a noise-canceling acoustic system.

This is a digital device that detects unwanted noise and then generates a sound signal that counters or masks it. However, a simpler alternative would be to just wear earplugs at home.

Living in a Shaky Apartment

Living in a shaky apartment might not be ideal. However, you can rest easy knowing that this shaking doesn’t put you in any danger.

If you want to get rid of the shaking or find ways to deal with it, consider noting down some of the tips mentioned above. 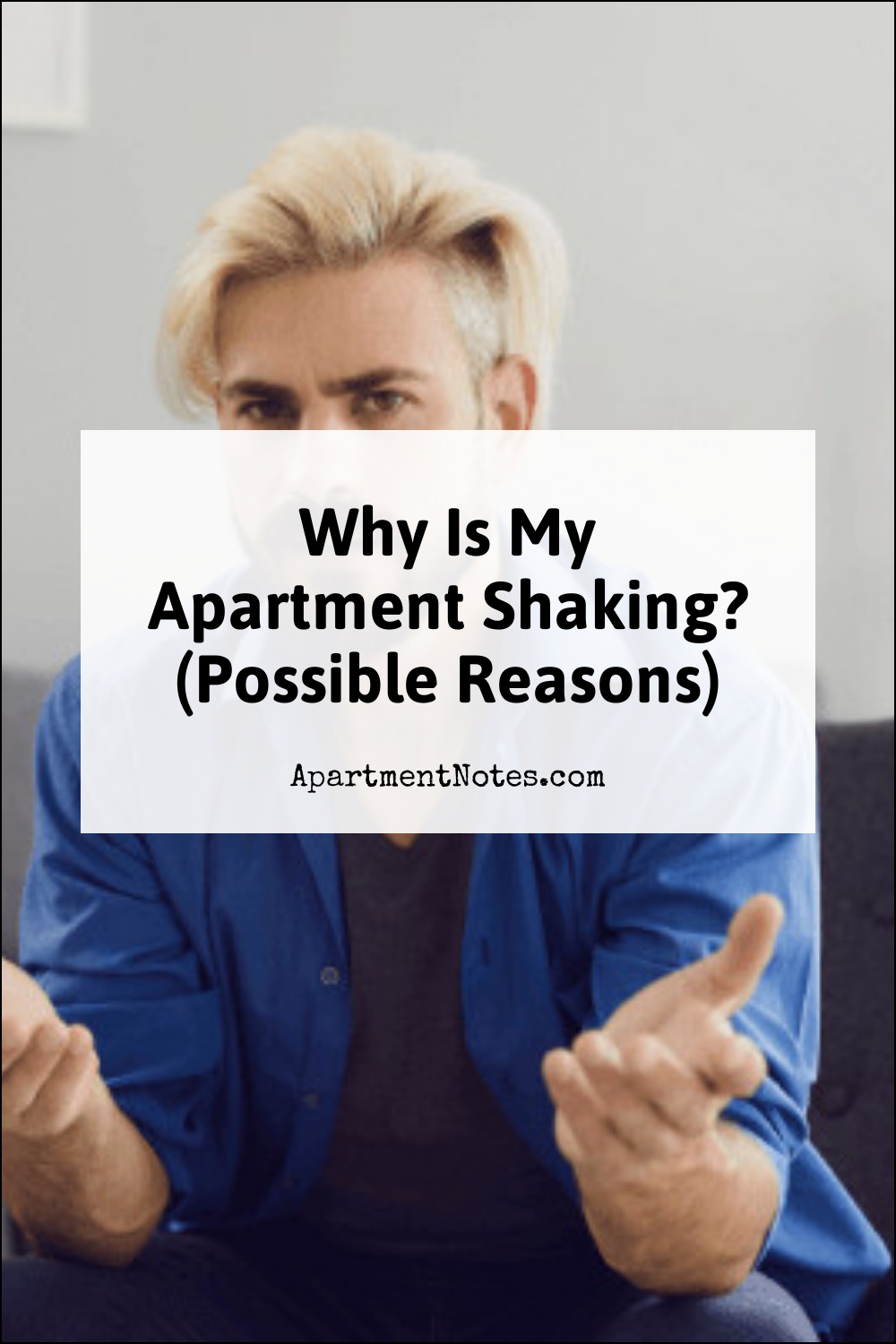