Apartment buzzer systems function by communicating messages between hardware on the building’s front door and your apartment unit. This is a somewhat complicated process.

In this guide, we will go over how apartment buzzers work and discuss the different types of buzzers.

Why Are Apartment Buzzers Needed?

Apartment buzzers have been around for many decades. This technology is useful for people who live in high rise apartments and need to allow trusted visitors into their building.

Without the help of buzzer systems, you would need to leave your apartment unit and reach the building’s front door to let visitors in. This would be tedious and time consuming.

Systems that allowed people to communicate with front door visitors from their apartment unit have existed over a century. Such early systems emerged before the telephone.

Pre-telephone intercoms consisted of long tubes that ran from the apartment unit all the way down to the front door.

You could speak into the tube from your apartment and communicate with a visitor down at the front door. These tubes didn’t directly carry your voice to the apartment entrance.

Instead, they channeled the vibrations from sounds and reproduced your voice at the front door end.

This is similar to communicating with someone through a pair of cans connected by a string. Note that this system allowed you to talk to visitors, but didn’t offer any way to let them in.

Such innovations enabled us to break away from the earlier analog communication systems. However, they were still used in many places until the telephone took over in the 1900s.

A company called “The Kellogg Switchboard Company” patented the first intercom that relied on telephone technology in 1894. This was essentially an electric doorbell system.

Visitors who arrived at the building’s lobby would need to pull a lever to activate the system. When the lever was in its down position, it would close a circuit loop.

This would then send an electrical signal up to the apartment unit and activate a receiver that would emit a buzzing noise. This is likely where the term “buzzer” first emerged.

You should note that this system functioned only as an electric doorbell. It didn’t allow the apartment resident to communicate with the visitor.

Therefore, this technology can’t really be considered an intercom.

How the First Buzzer Systems Worked

The modern buzzer systems that allowed two-way communication between residents and visitors emerged in the 1950s. These also included a remote unlocking function.

Therefore, the practice of “buzzing” someone into your apartment started around this time.

So how did this technology work? These intercom systems featured some of the same electrical connections as the electrical bell systems mentioned earlier.

Such systems did feature one new addition: transistors. Transistors were invented in the 1940s and allowed electrical hardware to perform more complex functions than before.

This included the ability to communicate with people at the building entrance by keeping a button pressed. You could then press another button to remotely unlock the entrance door.

The basic apartment buzzer systems described above remained popular for many decades. It isn’t uncommon to see such buzzers still in use in old buildings around the country.

Video intercoms became widespread in the 1980s thanks to the availability of video camera technology. These systems were often utilized at corporate offices and high-end apartments.

So how did these video call systems work? Visitors would first press a button to place a video call to the apartment or floor unit they wished to visit.

The resident would be alerted to this video call through a jingle or another type of alert sound. They could then press a button to accept the video call and see who was outside.

Such systems were equipped with both speakers and microphones on either end. This allowed two-way communication between the resident and the visitor.

Once the resident had verified the visitor’s identity, they could press a button to buzz them in.

As you might imagine, this technology was incredibly expensive in the 1980s. For this reason, it was utilized only in a few places, while basic non-video buzzer systems remained popular.

How the Latest Smartphone Buzzers Work

Smartphones have permeated our lives in more ways than one can imagine. This includes special apps designed to remotely control things around your home.

Such apps use a new technology known as The Internet of Things (IoT). IoT systems are essentially hardware systems connected to the internet at all times.

Such hardware can therefore be remotely controlled using a device such as a smartphone. Recently, this technology has been used to control apartment buzzers through your phone.

This IoT technology relies on complex programming, but it works in a very basic way.

When someone visits your apartment and dials your unit on the entrance intercom system, it immediately alerts your smartphone through the internet.

You can then use your device to see who is there and communicate with them using your phone’s microphone and speakers.

Once you have verified who it is at your apartment entrance, you can press a smartphone button to let them into the building.

These smartphone buzzer systems are the most convenient type of buzzer system out there. This is because you can control them from anywhere in your home using your smartphone.

So you could be in the laundry room folding laundry and still be able to see who is at your apartment entrance. Similarly, you could let someone in while sitting on your balcony.

These systems are also relatively cheap compared to the video call systems from the 1980s. This is because it requires hardware only at the apartment entrance.

You can use your existing smartphone to communicate with the entrance. Therefore, there is no additional investment required for each apartment unit.

What Types of Buzzer Systems are Best?

We have seen many types of buzzer systems discussed above. You might be wondering what the best type is.

There is no simple answer to this question as each type offers different advantages. Let’s look at which buzzer type would be suitable for various situations.

You Need a Simple and Affordable Buzzer

If you need a simple and affordable buzzer, you can’t go wrong with the typical phone-based system. This allows visitors to punch in your buzzer code and place a direct call to your unit.

It’s a straightforward system that is easy to use. In some cases, you can also get such buzzer systems with a buzzer code directory lookup system.

This system includes a special screen and control keypad that allows visitors to look up the buzzer code for each apartment unit using the apartment number or resident name.

This is perfect if you are expecting visitors such as delivery drivers who do not know your buzzer code.

You Want to See Who is at the Apartment Entrance

In some cases, simply speaking with a visitor over the intercom might not be enough to verify their identity. In such a situation, it might be better to have a video intercom.

A video intercom system can be pricey, but it will allow you to see who it is at the apartment entrance. This could be useful if you live in a neighborhood where crime is common.

You Want Unlock Your Apartment Entrance from Anywhere

Some people might need to unlock their apartment entrance while they are away. For example, you might have a guest staying with you who doesn’t have a spare key fob.

You could help your guest enter the building even when you aren’t at home by using a buzzer system linked to your smartphone through the internet.

As mentioned earlier, such systems work anywhere you have internet access. This makes them perfect for people who are frequently away from their apartment.

Enjoying the Convenience of Having a Modern Apartment Buzzer

As you can see, apartment buzzer technology has come a long way over the last century. This technology will likely continue to evolve in the future.

Such systems become even more complex with each new iteration. However, each one still serves its purpose of making life more convenient for apartment residents.

So consider reviewing the above guide again if you want to learn how apartment buzzers work and which type to choose. 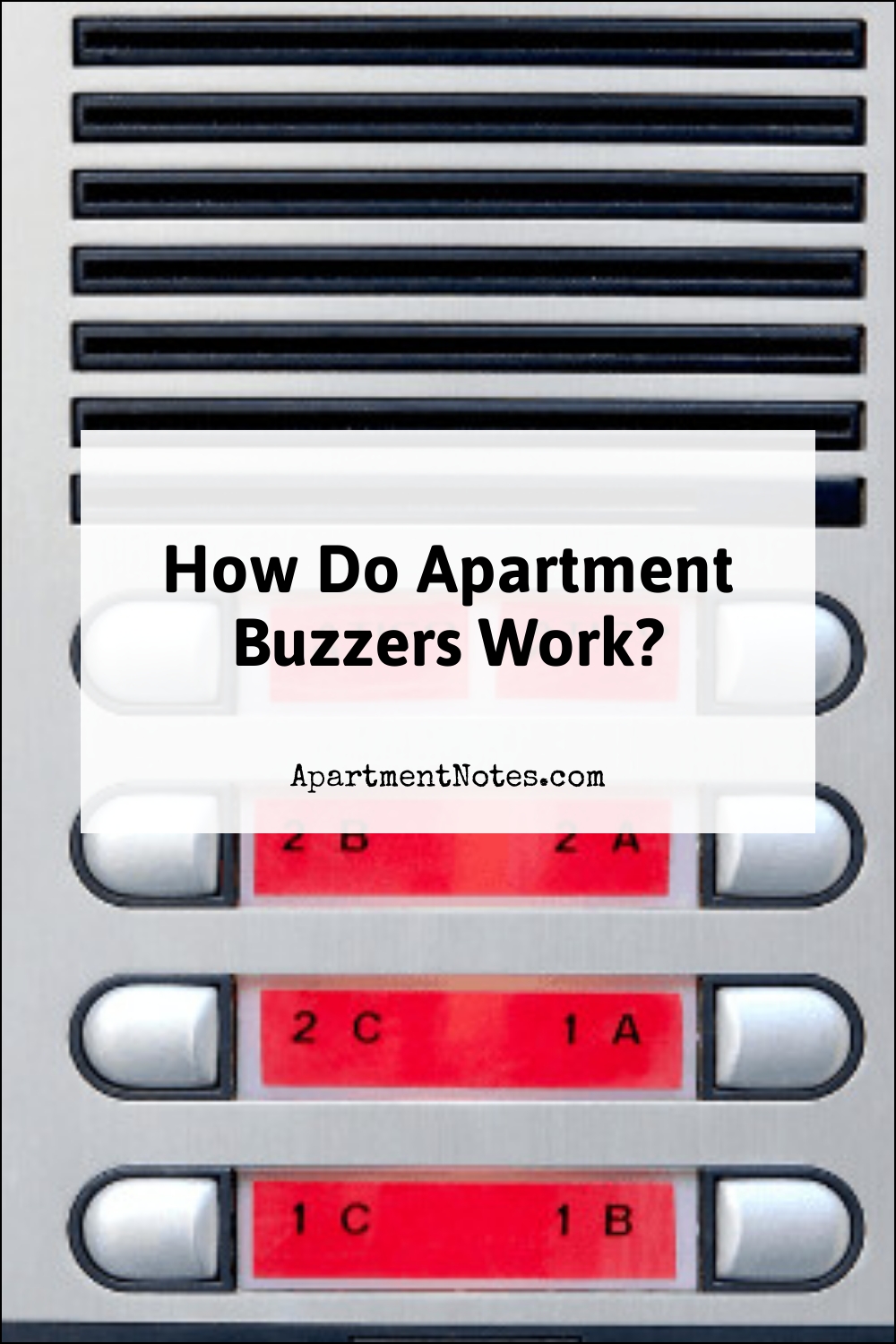