Property crime has decreased overall in the US during the first half of 2020.

The FBI crime report for the period January to July shows that burglaries have decreased by about 7.8 percent as compared to the same period the previous year.

This means that apartments are not as likely to be targeted by burglars compared to houses and mobile homes.

But that does not mean that a burglar will not target apartments.

Various factors determine whether an apartment will be an attractive target for a burglar.

Burglars seek dwelling units that are easy targets – and provide greater rewards. If you live in a posh neighborhood, the chances of the place being burglarized are higher.

Also, apartments located in dangerous neighborhoods with high crime rates are more likely to be burglarized.

Statistics show that dwelling units in lower-income neighborhoods had a higher chance of being burglarized.

Places with low or no security are attractive targets for burglars. Ease of access is also a factor that determines whether burglars will target a dwelling space.

For instance, apartment units that are located on the ground are more likely to be burglarized due to ease of access compared to upper floor apartment units.

If the door of the apartment can be easily broken by a simple kick, burglars will consider it a potential target.

Sliding glass patio doors that are installed in some apartments also provide ease of access.

Furthermore, if the windows are easily accessible and do not have secure locks, burglars are more likely to target the unit for burglary.

As per the Bureau of Justice Statistics, the presence of a household member in a dwelling unit is also a strong predictor of whether the place would be burglarized.

Most burglaries happen when there is no one at home between 6 am and 6 pm. This is the time when the dwelling unit is likely to be empty due to being at work or engaging in a leisurely activity.

How to Burglar Proof Your Apartment?

You can take various measures to lower the risk of your apartment becoming broken into.

Here are some tips that will give you peace of mind in knowing that your place will be safe at all times.

An inexpensive way to burglar-proof your house is to install a security alarm.

The security alarm can be installed on windows and doors. High-quality alarms have precision sensors that will blare when any vibrations are felt on the door or window.

Alarms won’t notify the concerned person in case of entry. But a loud alarm will alert the neighbors who can call the police.

These alarms typically are self-adhesive and stick in place at the required location. You don’t have to drill a hole for the screws.

You should buy a loud alarm with at least 110 decibels. The alarms can be turned on or off when required with a flick of a button.

You can easily turn off the alarm when you want to open the windows or doors.

Windows and doors are the most common mode of entry for burglars. Even if you install solid locks, they won’t provide any protection if the window or door can be broken with a kick.

To prevent forced entry, you should consider reinforcing the windows and doors.

Windows can be reinforced with extra locks or bars. This will make it difficult for a burglar to force entry through the window.

Consider replacing the existing doors that have a hollow core with one having that has a solid core.

The solid core doors can be a bit expensive, but the higher price is worth it due to the increased security that they provide.

Make sure that the door is properly installed with at least three-quarters inches long screws. This will ensure that the bolt won’t be forced open by a burglar.

You can also purchase door reinforcement kit plates that will make it difficult to force entry through the door.

For sliding doors, you can secure the door by adding an auxiliary foot lock. Placing a dowel in the tracks will also help prevent forced entry.

Motion sensing lights in the apartment can also be installed to deter burglary in an apartment.

Motion sensing light bulbs will notify residents in case motion is detected inside or outside the house.

The special motion-sensing lights will spotlight any trespasser who might be trying to break into the apartment.

The visibility of the light bulbs will be enough to deter a thief from entering a dwelling unit. If they can bypass the external motion-sensing bulbs, indoor lights will be able to identify the burglars for sure.

Surveillance systems are particularly recommended for luxury condos and duplexes.

Installing a remote home security system is also a great way to deter a would-be thief. The security camera should have important features such as night vision, HD camera, and remote connection.

It should also have a motion sensor to detect movement inside the apartment. Moreover, it should allow integration with a smartphone to provide live video feeds of the place to your mobile device.

Proper placement of the surveillance cameras is important. You should place the cameras discretely so that the burglars won’t disable them after entry to the house.

Other places to make the camera less visible is installing on the bookshelf, nightstand, or lamp.

Make sure that the camera is installed in a place where it can monitor all the rooms. You should buy a surveillance camera with a wide viewing scope.

Moreover, it should also be able to identify an intruder in low light conditions.

Keyless smart locks are recommended to secure the doors. Smart door locks use a finger or retinal verification to gain entry. Some locks have keypads that you can use to enter a password to gain entry.

You can also open the locks using your smartphone.

Installing smart locks will greatly increase the security of the apartment. Most burglars are also expert locksmiths that can unlock traditional locks.

Keyless smart locks will provide a high degree of security against burglary.

You won’t have to worry about losing a home key. Only property owners allowed to gain access can be able to unlock the smart locks to gain entry.

Most smart locks can be set in place of existing locks. You can easily install the locks without the need for drilling or hardwiring.

The cost of the locks is also not that expensive. A quality smart lock with smartphone access and log feature costs about $100.

Doggie and cat flaps provide easy entry to the burglars. You should consider the security issue before installing the flap.

A burglar can get the arm through the flap to unlock the door from inside.

To prevent burglars from opening the lock, consider installing a dog or cat flap on a wall instead of the door. You can also buy a flap with an electronic lock and an RFID chip.

The chip that can be installed on the collar of the pet dog or cat can only open when it detects the pet.

You should store all your valuable items in a safe place so that a burglar does not take them all in one swoop.

Consider storing the valuables in a secure safe installed in discreet places such as behind the closet or cabinet, bookshelf, or even inside devices such as game consoles and stereos.

Be creative when it comes to finding out hiding places for your valuable items. One idea is to place your valuable stuff in a ziplock bag or insert in a vegetable like cabbage.

You can also place fake jewelry in visible places so that burglars don’t look at other places for finding valuables. Since the burglars are in a hurry, they won’t likely notice that the jewelry is fake.

Final Remarks about Burglary in Apartments

The steps taken today will help you prevent huge losses in the future due to a break-in. 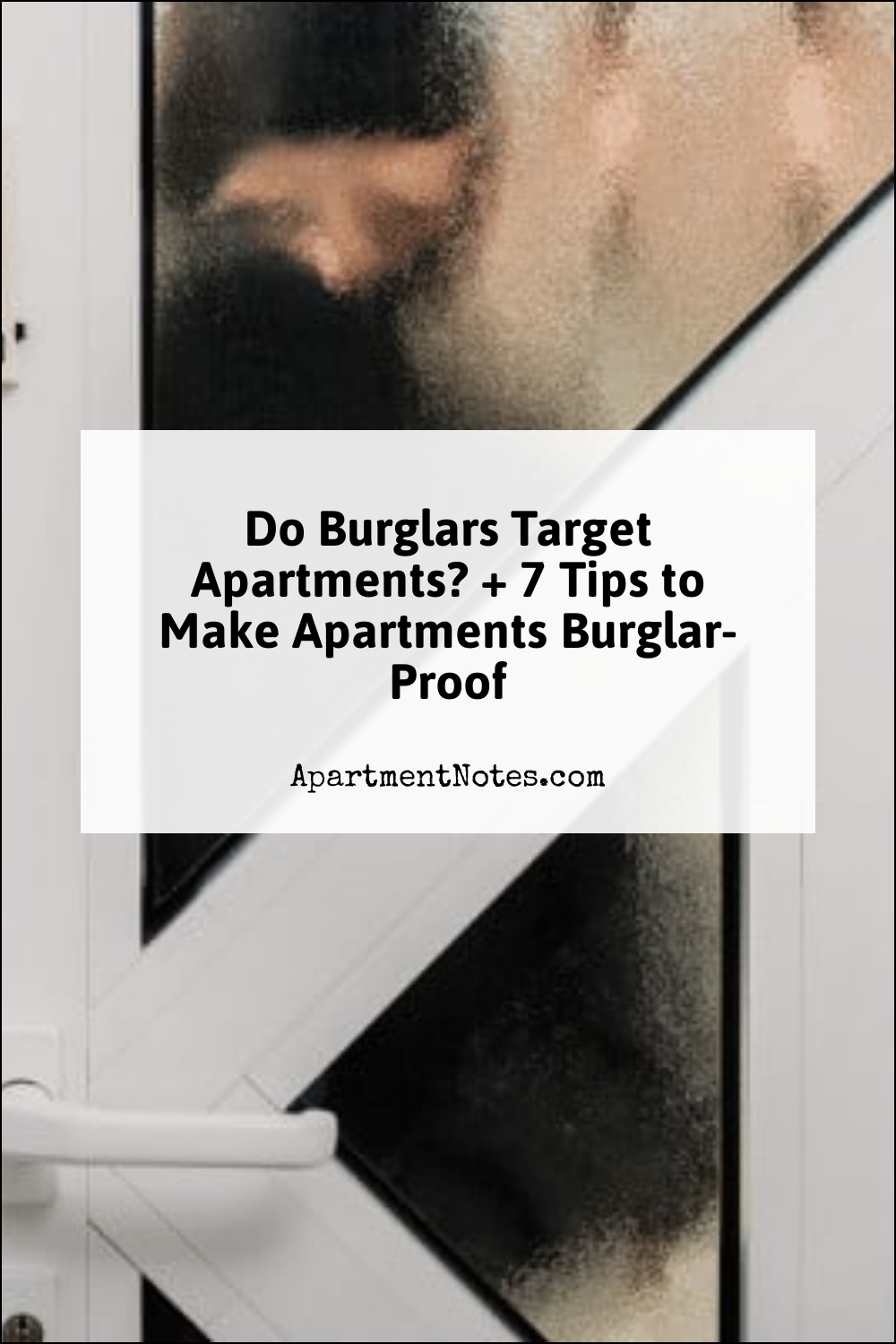