A fish is a tasty and nutritious meal, but it can turn annoying really quickly if you have to keep smelling it in your small apartment for the next three days.

Strong scents, such as those from cooking, spread far and wide easily. If you live in a small apartment, this can be a problem.

Not only is it uncomfortable for you, but it can also be slightly embarrassing as well if you happen to have guests over.

So, keep reading to learn 11 simple ways to get rid of cooking smells in a small apartment.

You should start with some preventative measures first. Try to stop any cooking smells from spreading in the apartment in the first place. The easiest way to do this is to seal off your kitchen from the rest of the apartment.

This way, the cooking smells will stay contained in the kitchen and not spread beyond it. However, the idea is to seal the kitchen only from the rest of the apartment.

Don’t seal it off completely. Poor ventilation in the kitchen can lead to numerous accidents and spread toxins in the air.

Therefore, keep the kitchen door closed, but the windows open.

This will allow the cooking smells to drift out and not spread out in your apartment. You can also place a fan near the window to help disperse the smell faster.

If there aren’t any windows in your kitchen, keep the door open, and use one of the other ways we’ve mentioned in this article.

If you happen to have an open kitchen, then this won’t work for you either.

Get Rid of Scraps and Garbage Right Away

Another preventative measure is to get rid of your food scraps and other garbage right away.

The longer it stays in your kitchen, the more time it has to spread its smell around your apartment. So, as soon as you’re done cooking or eating, don’t just leave this task for the morning.

Clear everything up right away and take the garbage out immediately. You might feel lazy in doing this after all that time and effort spent on cooking.

But if you do, you’ll be glad later on when you wake up to a fresh-smelling apartment rather than one that stinks of last night’s leftovers.

Keep a Bowl of Baking Soda Nearby

Baking Soda is a popular ingredient in the kitchen and otherwise.

It is often used in baking and is an effective ingredient used for cleaning hacks. It has deodorizing properties that quickly absorb nasty smells and get rid of bad fragrances.

To use this in your kitchen or any other place in the apartment, pour some baking soda into a bowl and place it wherever you like.

It can be right beside the stove or anywhere outside the kitchen. You can make small pouches of it and hang it around the apartment as well.

Additionally, you can add a few drops of your favorite essential oils, such as lavender or jasmine. This will further help in getting rid of smells and replacing it with something nicer.

Sprinkle some baking soda in your trash can to prevent any garbage smells from permeating your apartment air.

Boil a Vinegar and Water Mixture

Similar to baking soda, another commonly used ingredient is vinegar.

It has a strong smell itself that can help neutralize other foul odors in the apartment. Take a mixture of vinegar and water in a 1:1 ratio and boil it on the stovetop.

As this mixture boils, its vapors will spread around the kitchen and your home to help get rid of the cooking smells.

Alternatively, you can also place bowls of vinegar in the kitchen. However, this won’t be as effective against stubborn odors. You might have to leave it out overnight for it to work.

Other than that, vinegar is a great cleaning agent. Therefore, once you are done cooking, you can clean your kitchen using vinegar to disinfect it and thoroughly get rid of any food bits or splatters.

Use an Air Purifier

What better way to eliminate bad odors and freshen the air in your apartment than using an air purifier?

You can get one specifically for the kitchen to counter those cooking smells. Alternatively, you can get a portable one that you can use all around your home as the need arises.

This will not only deal with the strong cooking smells but also improve the overall quality of air in the kitchen.

It will remove toxins, bacteria, and other airborne germs for cleaner and pure breathing air. If you’ve furry pets at home, this will help with all the pet dander too.

Furthermore, if you set it up before even starting your cooking, it will prevent the smells from spreading in the first place.

Bake Some Goodies Instead

The entire problem here is that you don’t want to smell that fish or curry during or after it has been cooked.

So, what if you actually cooked something that you would like smelling all day long? For instance, wouldn’t you love smelling your favorite cookies or brownies?

Since the cooking smell is going to spread anyway, you might as well let it.

Then, later on, you can do some baking with vanilla extract or cocoa powder, which will then have your whole apartment smelling like a bakery. Now, who doesn’t want that?

This is a simple way to replace the bad smell with something better and get some freshly baked goods as well.

Another way to get rid of the smell is to use bamboo charcoals. They work like baking soda in absorbing the foul odor in the kitchen, leaving your small apartment smelling clean and fresh.

This charcoal is odorless itself, so you don’t have to worry about any other scents lingering in the apartment.

Add a few pieces of this charcoal in a burlap sack or in small pouches and hang them inconspicuously around your kitchen.

They will absorb the cooking smells and prevent them from staying in the apartment for too long.

Not everyone has a kitchen vent above their stovetop in the kitchen.

However, those who do, they might only use it when there’s a lot of smoke involved. Some vent models can be quite noisy as well, which can be annoying and why people don’t use it.

However, we’re sure that everyone will agree with the fact that cooking smells in your whole apartment are infinitely more annoying than a noisy vent.

So, you might think that the vent is just for smoke, but it can be as useful for removing smells from the kitchen.

The next time you plan to cook with some pungent ingredients, turn on the vent to eliminate the smell quickly.

Use a Splatter Screen

Sometimes, you won’t detect any smells after cooking right away. Instead, you might start noticing a bad odor after a few days.

This usually happens when you’ve been cooking in hot oil. The oil splatters can go all over your stovetop, walls, and cabinets.

When left like that for a few days, they start spreading a bad smell. Therefore, whenever you’re dealing with oil splatters, it’s best to use a splatter screen and prevent them from getting on your kitchen surfaces.

If they’ve already spread all over the place, use cleaning agents like vinegar, baking soda, etc.

These will not clean the oil splatter easily, but also take away the foul smell with it.

You can also replace the bad smell with other strong and more pleasant scents. More importantly, you can use whatever’s easily available at home, without spending any extra money or effort.

For instance, you can use any herbs or spices with a nice fragrance, such as cinnamon, basil, rosemary, nutmeg, etc.

If you’ve fruit peels lying around, specifically citrus peels, you can use those as well.

Add all these to a pan full of water and let it boil on low heat for a while. The steam rising from this should spread a pleasant scent in your apartment.

Burn Scented Candles Around the Apartment

One of the quickest ways to get rid of cooking smells in your apartment is to burn scented candles. These come in various sizes and scents, so you can pick the one you like the most.

Then, whenever you feel like your home smells bad, you can burn these candles for a while.

They will not only effectively finish that smell but also create a soothing environment. Alternatively, you can also burn incense.

With these 11 easy ways, you can prevent or get rid of cooking smells in your small apartment in a jiffy.

In fact, these tricks can work in getting rid of any general odor in your apartment.

Lastly, even if there’s no smell at all, you can burn a scented candle or use an air purifier anyway to keep your small apartment cozy and fragrant. 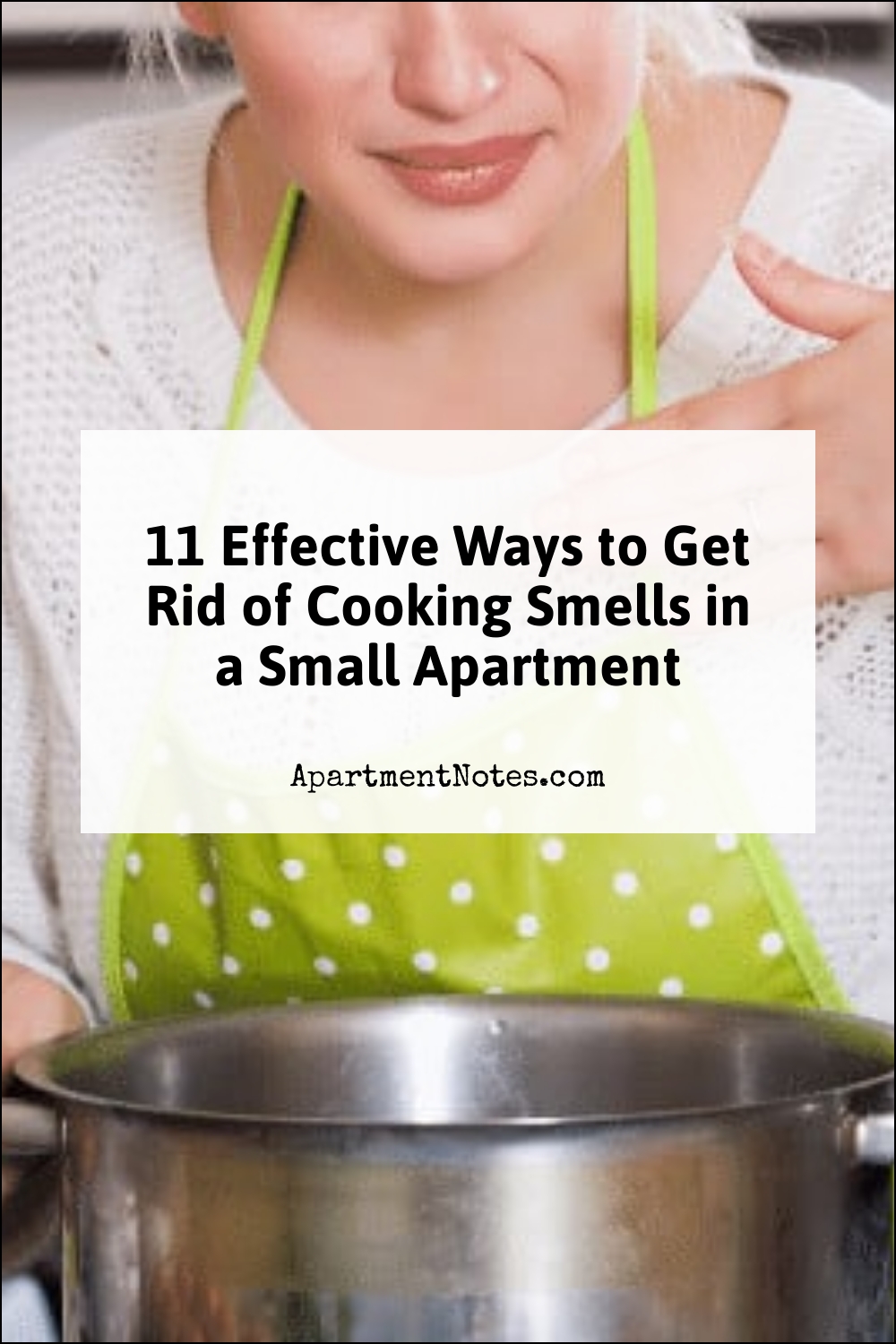